A Great Place To Call Home!

Located in historic Decatur County, Indiana, Westport is a great town filled with some of Indiana’s finest businesses and residents.

We invite you to come and visit our town, learn of its great history and support our local businesses. 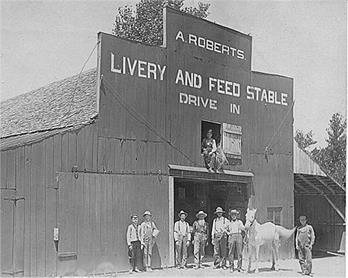 The town of Westport was founded on March 23, 1836, by Hockersmith Merryman and Simeon Sharp. As there were only twenty lots in the original plat, the town itself was very small. However, nearly all of the land in Decatur County had been purchased by that time. It is one thing to talk about Westport as a town, but quite another to talk about it as a community. There were many people living nearby in 1836, but not in the actual town.

According to George Boicourt, who settled permanently in Decatur County in 1831:

In 1836, Simeon Sharp and Hockersmith Merryman laid out Westport. They sold a few lots, three log huts were built, and a Mr. Wm Shultz opened a small store, which he sold a short time later to Richard Belt. The first frame building erected was the Gidding’s Shop and was erected by Mr. Wm. Shultz.. The next frame building was erected by Noah Merryman. In this were kept a few groceries and plenty of whiskey. John Cann erected the third frame building and opened a dry goods store.

When Lewis C. Stott came to Westport around 1840, he found only three householders, and one store-keeper. The householders, according to Mr. Stott were Dr. William Shultz, Frank Talkington, the first blacksmith, and John Cann who owned the wagon shop. The storekeeper was Dick Belt. Mr. Stott started a tanyard about a half mile north of Westport.

According to another narrative by George Boicourt:

About the year 1850, two men, James Vandever and Ples Griffy, started a tin shop in Westport and soon had a good trade. The first cabinet-maker was L. D. Underwood. In 1855, Dr. William M. McCullough opened the first drug store, which he sold, and opened a dry goods store. The dry goods business he sold after a time to Mr. John Cann who carried it on for years. Westport now began to look like a center of some trade. A large dry goods store was opened by Dr. McCullough and Robert Armstrong, William T. Stott and  Milt MeWhinney conducted the drug business.

The town grew steadily from 1836, but during the Civil War was short of man-power, as many of the able-bodied men were in the service. At that time, the block south of Main Street seemed to be the center of activity. On the east side of the block was the Methodist Church; on the southeast corner, The Westport School; on the southwest corner, The Christian Church; and along the north side, on both sides of Main Street, were several business establishments.

But during the night and continuing until the early morning of Tuesday, August 13, 1872, a disastrous fire swept several buildings on the north side of Main Street. When it was all over, several business buildings and businesses had been wiped out. Destroyed were the DeArmond Brothers’ Hotel (then owned by Robert Armstrong), the dry goods store of Robert Armstrong and Wm. M. McCullough, Wm. T. Stott’s drug store, the tin shop, Cann’s General Store, the General Store of Isam T. McCammon, and also the McCammon residence. The Masonic Lodge Meeting Hall which was above the drug store and post office was also destroyed. The wind was from the south that night, and people who lived as far as a quarter mile north of town had to climb up on their roofs and put out fires started from burning shingles which were carried on the heated air.

The fire was a serious setback to many of the Westport businessmen. Some of them returned to business, and some rebuilt on Mulberry Street, a block north of Main Street, in order to keep their buildings father apart. However, the town started to deteriorate, and the population dropped from 500 to 212 by the late 1870’s. But the building of the V.G.&R. Railroad in 1880 put new life into the community, and it continued to grow. Also, the good reputation of the Westport School attracted people to the town.

In 1884 the Baptists built a new frame building, replacing the old brick building which stood on the same site. In 1890, S. J. Richardson started a newspaper in Westport. The Methodists, in 1892, built a new brick building which is sill in use. A new school was built in 1896, as the old one was beginning to settle and had to be replaced; also the enrollment had outgrown the old facilities.

On the night of November 13, 1911, Westport was the scene of a second large fire, this time on the south side of Main Street. At least eight buildings burned before the fire was brought under control. Four barns burned in the intersection of the two alleys just southwest of the Low Hotel. In fact, the fire started in the rear of the barn of the Low Hotel. It then spread to the hotel, and then to Whalen’s Hardware on the east. It next leaped across the alley to the west destroying the late S. C. Cann’s residence and Mrs. R. L. Slater’s Millinery Store. The wind was from the west that night, and because the firemen now had hoses, nearby buildings were spared which otherwise would have been burned.

A new building, constructed by the K. P. Lodge, replaced the Low Hotel on the same site in 1912. Also in 1912, the Christian congregation built a new brick building, and the Old Church building was purchased by the Westport School Corporation in 1914, and converted into a gymnasium in 1922. Also in 1914, Frank Hamilton constructed the large brick building which is now Quality Foods.

In 1916, the K. P. Lodge built a second building adjoining the first on the west. This was occupied in 1916 by Conwell’s Pharmacy until 1942. When the last building was put up, the entire block has one continuous, solid front.

The Baptist congregation finished construction on a new house of worship. It was dedicated on July 30, 1916.

From the time of the first World War, until after the end of World War II, Westport did not grow very much. The depression, which occurred from 1928 and extended into the late 1930’s, was one of the reasons for this lack of growth. Only a few large business buildings have been constructed in Westport since 1920. Bewley’s Bakery was built in 1927; and at somewhere near the same time, Narwold’s garage and restaurant building was built.

From 1912 until 1947- a period of 35 years-no new residential additions were made. However, starting in 1947, with Mcllwain’s addition of twenty-three lots, there have been many other additions, containing about 250 lots in all, and most of these now have good homes on them. There have been several small business buildings constructed since the end of World War II.

The installation of a water system in 1947, and a sewer system several years later, stimulated the construction of private residences, and began attracting the new businesses hoped for.

The construction of State Highway 3 in 1937 put Westport on a main highway for several years, but the abandonment of the Chicago, Milwaukee, St. Paul, and Pacific Railroad to Seymour, and the abandonment of the Big Four Railroad from North Vernon to Greensburg, along with the construction of Interstate 65 and 74, all helped put Westport farther from the main business arteries. The loss of the Westport School also had a negative effect on the town.

Westport, in 1984, was recognized more as a residential community and less as a business community. But, there are many forces at work to bring more business to the community of Westport. T.I.W.A.B.A. was influential in bringing Wheaton USA to Westport which created many exciting job opportunities.

In 2021, Westport will be celebrating its 185th Anniversary!